Many people may not know that there are several different types of Cucumber. Cucumber plants are warm-weather plants that may thrive in hotter climates.

They are ready to harvest in around 60 days, making them suitable for growing even in areas where hot weather only occurs for a few months a year.

These plants are simple to grow and provide a lot of enjoyment. In this article, we will be discussing the different types of Cucumber varieties available.

Cucumbers of this variety are long and thin, with narrower ends. They usually range in size from 10 to 15 inches in length.

The cucumber’s dark green skin is smooth or slightly ridged, and the skin is so thin that it does not need to be peeled before eating.

These cucumbers are regarded as the ‘common’ cucumber in most European countries. However, they are less prevalent in North America.

They have a little sweeter flavor than regular garden cucumbers, and the flesh is a very pale green, almost white, and juicy.

English cucumbers have no seeds and are frequently referred to as “seedless cucumbers.” These cucumbers are typically sold wrapped in plastic to enhance their shelf life.

Furthermore, they’re best served raw in salads and sandwiches, but they’re also delicious in cocktails like martinis and G&Ts.

This species of Persian cucumber is perfect for snacking because it matures to a bit size of between 3 and 5 inches, which explains why it’s called ‘green fingers.’

These cucumbers are easy to cultivate from seed, taking about seven days to germinate and 60 days to harvest.

These plants can be planted in early April and harvested by late June in milder climates; they will continue to produce cucumbers throughout the summer, providing a long harvest season to enjoy these crunchy fruits.

The plants can be grown outside in May in colder climates, with the earliest possible harvest date being late July. Furthermore, This plant has a fast-growing habit, producing vines up to 5 feet tall with shallow roots.

When fully ripe, these cucumbers are 8 to 10 inches long and 2 to 3 inches wide, making them ideal for slicing. They can, however, be used as pickling cucumbers when young and much smaller.

These cucumber seedlings will germinate in three to ten days and be ready to harvest in 58 to 65 days. They’re seedless and burpless, which means they contain very little or no cucurbitacin, the gas-producing component found in cucumbers.

This is one of the different types of cucumbers that its skin is fragile and quickly eaten, and the fruit is crunchy and bitter-free.

In 1956, in Charleston, South Carolina, these heirloom cucumbers were created. They are prevalent for growing in hot, humid settings because they are resistant to downy mildew, which damages many other cucumber varieties in these conditions.

When ready to harvest, Ashley cucumbers take about 65 days to mature and measure between 6 and 8 inches long.

However, they are dark green in color and taper at the end where they connect the plant’s stem. They have a rough texture, with some bumps on the surface.

Furthermore, these cucumber plants are noted for their high yields and are popular for home gardeners and farmers’ markets in the southern United States.

When mature, these cucumber plants yield snack-sized cucumbers that measure roughly 5 inches long. They’re great in kids’ lunchboxes, on picnics, or as a snack right off the plant.

They have a crisp texture and a light flavor, making them ideal for serving as crudites on a hot summer day. This plant is recognized for providing a large output of cucumbers and may be grown both outsides and in a glasshouse.

These cucumbers are one of the different types of cucumbers that contain seedless flesh and a smooth, glossy medium to deep green skin.

Also, this is a highly popular cucumber to raise because of the delicious and gorgeous cucumbers it produces. It’s a multi-award-winning cultivar.

In 54 days, this cucumber variety will be ready to harvest. It produces huge cucumbers with a length of at least 14 inches. This is one of the different types of cucumbers that are seedless and burpless, and they have a sweet, non-bitter flavor.

Their skin is dark and smooth, and it is thin enough that You can eat the fruit without peeling. They’re perfect for salads and other savory cold foods.

Moreso, this cucumber plant has won numerous awards for its outstanding performance. Many diseases that often attack cucumber plants, such as leaf spot, scab, and cucumber mosaic virus, are resistant to it.

This cucumber plant produces straight cucumbers eight inches long, just as its name says. The fruits have a spherical form at either end and a smooth, dark green skin.

Also, this is a heritage cucumber cultivar popular among home gardeners for decades due to its consistent yield and tasty cucumbers. It’s a simple plant to grow, and it’s frequently picked as the cucumber variety to grow with kids to pique their interest in gardening.

Unlike other cucumbers, which are either pickling or sliced, this is a multi-purpose cucumber that may be eaten raw in salads or pickled, though it is most usually used for slicing.

Furthermore, This plant has a trailing habit, with tendrils that can reach 6 to 8 feet. When grown on a trellis, it produces the best results. This is one of the different types of cucumber.

READ:  How to Grow and Maintain Begonia Houseplant?

This Burpee unique is resistant to mosaic virus and is ideal for container gardening or raised bed gardening.

The All-America Selections award was given to Diva’, a hybrid cultivar that produces semi-glossy, thin-skinned fruits six to eight inches long.

The ‘Diva’ variety is mostly seedless and has a sweet, mild flavor. High yields on vigorous vines are available to harvest in 58 days. This cultivar has scab resistance as well as tolerance for downy and powdery mildew.

Although the fruits are versatile and may be eaten raw, this is considered one of the greatest types of pickling cucumbers you can cultivate.

These cucumbers will be roughly 4 inches long and half an inch wide when fully mature. They have medium green skin that is smooth.

Furthermore, these cucumber plants are noted for delivering significant fruit harvests consistently. The vines are disease-resistant, and the fruits are uniform in size and appearance.

Between days 45 and 55, cucumbers will be ready to harvest. These small vines will work well for anyone who wants to cultivate cucumbers in a small space. This is one of the different types of Cucumber.

Because of the very large output of fruits it produces, this species of cucumber plant has been widespread since the 1920s.

The name ‘double yield’ suggests that this plant produces an abundance of cucumbers. Also, the fruits are around 4 to 6 inches long and have rounded ends.

Furthermore, the skin is a medium green to yellow-green color with black spines occasionally. After 52 days of seeding, these cucumbers are ready to harvest.

They’re fantastic for pickling, but they’re also deliciously eaten right from the vine. This is one of the different types of cucumber.

In 1978, this cucumber plant won the All American Selection award; nevertheless, it has gone out of favor in recent years and is now difficult to come by. This plant produces cucumbers with dark green skins and crisp flesh.

They developed this cucumber plant in the 1980s at the University of Wisconsin. When the fruits are little, they are commonly used as pickled cucumbers, but if you leave them on the vine for longer, they will mature into full-sized cucumbers ideal for slicing into salads.

This plant’s cucumbers are dark green with delicate creamy-green streaks. There may be white spines, but they are readily scraped away.

These are self-pollinating, easy-to-grow plants that can be trained to trail their vines around a trellis or other support or left to spread across the ground.

Furthermore, these plants are widely grown because they are resistant to a wide range of illnesses and appear to be better able to survive harsh weather and evolving circumstances.

Around 60 days after sowing, the fruits will be ready to harvest. This is one of the different types of cucumber.

Cucumbers are versatile enough to be used for pickling or slicing. On day 57, after seeding, they are ready to harvest and can grow 2 to 5 inches long, depending on when you remove them from the vine.

The fruits have white spines and are dark green. The best feature of this cucumber plant is its disease resistance; in fact, it is said that this is the most disease-resistant cucumber plant currently available.

Furthermore, It grows best when supported by a trellis and produces straighter fruits. When trained, this plant is predicted to grow between 4 and 6 feet tall.

Lemon cucumbers are popular as a novelty crop. These plants produce cucumbers the size of a tennis ball, measuring 3 to 4 inches long.

The spherical cucumbers are merely lemon in color and do not have any citrus flavor. These cucumbers have a similar flavor to regular cucumbers but with a milder flavor.

The skin is thin and simple to eat, and it is pale yellow with some darker yellow patterns. Also, these cucumbers are the perfect portion size for one or two people, which is helpful if you don’t enjoy having half a cucumber leftover after making a salad. At 65 days, these cucumbers are ready to harvest.

The Armenian cucumber is sometimes mistaken for cucumber, but it is a species of muskmelon known scientifically as Cucumis melo, closely related to the cucumber.

With a long and slender body and pale, juicy flesh that tastes like cucumber, it has more in common with a cucumber.

The ridged shell of this fruit comes in various colors, ranging from medium green to pale green-yellow. Because of their ability to grow so long, these fruits are sometimes referred to as ‘yard-long cucumbers.’

Cucumbers grown in the garden are the most frequent in North America. They have dark green skin and are relatively smooth.

Cucumbers in supermarkets are usually waxed to help them keep moisture. As a result, these cucumbers should be peeled. Unwaxed types are available (especially at farmer’s markets), but if the skin is thick or bitter, you may choose to peel it.

However, because of the large seeds in these traditional garden cucumbers, many recipes demand seeding (or de-seeding) before using them. They’re ideal for any dish once the seeds are removed. This is one of the different types of cucumber.

Kirby cucumbers are often short and rough in appearance. Their skin color ranges from yellow to dark green.

Kirbys are deliciously crisp when eaten raw, but they’re also flavorful enough to pickle. They’re even marketed as “pickling cucumbers” on occasion. 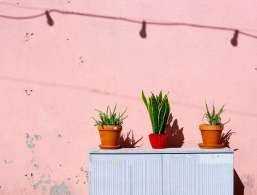 Important Reasons Why You Should Own an Aloe Vera Plant

Aloe vera is one of the oldest medicinal plant on the planet; its therapeutic

What’s the first picture that comes to mind when you hear the word lily?

Squash is a round shape fruit that grows on vines