Reasons You Should Travel With Your Kids

There are many reasons why you should travel with your kids that many parents dont know about. Travelling as a family can be fun, plus it is a crucial time for the family to bond. It also provides numerous opportunities for the kids to get educated and grow.

Travelling opens their world to foreign foods, art, knowledge, culture and experiences that they don’t learn in school. Traveling also amplifies the affection between members of the family. It lowers the amount of time spent worrying about one thing or the other.

Not all kids might be fun travel companions, but travelling is a beneficial activity for kids. Some parents prefer to travel and leave the kids behind in the care of a relative or guardian.

This is for a lot of reasons, some of which are hilarious. Ever tried travelling with a child before? They are experts in making you the centre of unwanted attention.

Some kids, out of excitement or some other impulsive feeling, can get fussy, create a lot of hassles, get noisy and even wreak havoc on your trip. However, there are still a good number of well-behaved kids who make travelling fun and worthwhile.

Some parents are not enthusiastic about family road-trips, but this article seeks to give compelling reasons why you should travel with your kids, and they include:

Travelling with your kids makes them citizens of the world. Children are better at adjusting than adults are. The sooner we get them exposed to other environments in all its variety, the more likely they are to become outgoing and selfless as they grow.

Your reason may be keeping them from the negative influence of the outside world. The downside to this is that they tend to believe the world they know and grew up in is all that exists, and a foreign culture night is overwhelming.

When kids travel to a foreign land, they inevitably encounter one of the elements of culture shock; food. Their tongues get introduced to strange foods they hadn’t tasted before nor knew existed. Food is one of the strongest ways to understand a culture.

Besides, exposing your kids to foreign foods has a counter effect; they get to appreciate the home cuisine more. Imagine saying no to eating fish at home yet eating fish tacos on a Mexican beach?

Expose their brains to a variety of languages

Another vital element of culture is language, and foreign land is equivalent to a foreign language. Your children get exposed to the sounds of a language they might have never heard before. Though they may not learn such language, the exposure helps their brain develop.

Hearing new languages can trigger the brain to develop language skills rapidly. A scientific study was recently carried out, and its findings revealed something exciting. It discovered that even a minute exposure of kids to a foreign language triggers stronger memorization of phonological structure later.

Builds their confidence and independence

Travel experiences have a way of boosting the confidence of your kids. They might see someone try out something and will want to do the same. The kicker is they might want to do it on their own.

If your stay in a new environment isn’t ephemeral, your kids can immerse themselves into the environment and create new habits in a brief time. Memories like this will linger even after you and your kids have departed from such an environment.

Your child would become aware that the world is big and diverse, and there is more to the world they know. They may also experience a change in how they relate with other people. Travelling strengthens their confidence because it takes them through strange territories, both physically and mentally.

READ:  How Should You Discipline Other People's Kids?

Increases their tolerance for discomfort

Believe it or not, travelling widens your child’s capacity for tolerance. Some travel experiences aren’t smooth, and there might be some elements of discomfort here and there.

It could be a warm soda or a lumpy pillow, and it could even be the buzzing of nearby insects. It could also be the late arrival of the means of transportation.

Your kids get exposed to travel anomalies and with time, get to understand that they are just part of the possible things that could go wrong. They understand that such challenges help them come up with ways to lessen the discomfort, which makes them problem-solvers. They learn to exercise patience and also to express their gratitude in different ways.

Kids are inquisitive beings and what better way to indulge that curious nature than a travel experience. Travelling opens them up to a whole new world of questions. It can also inflame their imagination and motivate them to play in creative ways.

Seeing a mesmerizing place like this can make them inquire about this ancient and abandoned city. Other places can also be great learning centres. They can explore museums and learn about foreign art. They get to also learn about children literature in that country.

A recent study carried out by the University of Georgia showed that pupils who travelled abroad attained higher grades upon returning to their school. The Wagner Group also discovered results of a similar nature.  Moreover, travel motivates learning and boosts the desire in kids to learn more.

Travelling to nature-themed destinations can help give your child a big break they need from their gadgets and tech. This gets them to marvel at how far the world has come, and they tend to become more interested in its history. They get to take their eyes off their phone and computer screen and watch animals in motion.

An experience with nature can be very refreshing and stimulating for the senses. This break from the screen of their gadgets gives them time for a psychological rejuvenation and motivates kids to become more active members in the world around them.

Staying for too long in a place can constrict your mind. Travelling opens up your kids’ mind as they get exposed to new things. They become more understanding and respectful. Kids can mingle, socialize and play with other kids in these foreign places. The bond that develops between them transcends beyond linguistic and cultural differences.

If you think your kids are too young and tender to be open-minded, then you need to have a rethink. This is the best stage for them to open their minds. Kids benefit a lot from being their parents’ travelling companions. Parents should be encouraged to overlook the issues that come with badly behaved kids and take the chance.

This could also be an adventure for the parents themselves. Getting to witness their kids grow in every aspect of their lives. Besides, travelling makes a great hobby for both the kids and the parent. Families should be encouraged to take a vacation together to different locations every year.

There are a thousand places you can go to with your kids to get a memorable experience. In the United States, you have places like Disneyland, millennium park, Miami Beach, Jackson Hole and the Mike high city. Europe has tourist attractions such as the Louvre, the Eiffel tower, and so many more.

88 Roman Names for Boys and Their Meanings Toddlers in Daycare: the Benefits and Drawbacks of Early Schooling

Most parents find daycare centers as a necessity since most families today need, 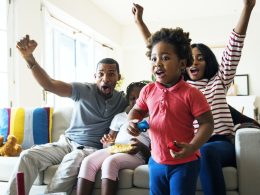 Do you have a newborn and are considering parenting techniques?