A greenhouse, also known as a glasshouse, is a structure specially designed with specific features that allow it to protect and favor the growth of tender or out-of-season plants.

During the 17th century, greenhouses were initially made of wood and bricks.

But these days, they are now chiefly made of glass or plastic over a metal or wooden skeleton. However, most greenhouses are made of glass, so they are also known as “glasshouses.”

These structures come in various sizes, ranging from a simple small shed to a commercial-sized building. Small-sized greenhouses are also called “cold frames.”

This is because it is used to protect its content during freezing weather. They are designed to have their interiors exposed directly to the sun, making them relatively warmer than outside the building.

The industrial-sized structures, also called hothouses, are facilitated with high-tech equipment to protect and favor the farming of flowers, fruits, and vegetables.

The equipment used in the building includes lighting, cooling, heating, screening installations, and computers (which are used to control other technological products).

Trained individuals are employed, and various techniques are applied to evaluate and regulate climatic conditions to make it favorable for plants to grow.

The climatic condition that is being regulated in greenhouses includes temperature, vapor-pressure deficit, and relative humidity. This is to reduce the risks of production present in the traditional way of cultivating crops and flowers.

Note: Industrial-sized glasshouses are essential in agriculture, horticulture, and botanical science in general. At the same time, small-sized structures are widely used by home gardeners, collectors, and hobbyists.

The concept of the greenhouse was not birthed in this modern time. The modern greenhouse is known to have gone through many innovative processes.

This is why it has evolved to what it is now. The evolution of greenhouse are as follows:

In ancient times, there once lived an emperor named Tiberius. He was a Roman emperor who loved eating cucumber-like vegetables every day.

This made the roman gardeners develop ways to make cucumbers available even when they should be out of season. They decided to plant the cucumbers in wheeled carts.

They would put their mobile garden in the sun every day and then take them inside at night to keep them warm and safe from harsh weather.

They stored the cucumber plants in frames glazed with sheets of selenite or an oiled cloth (called specularia).

It is believed to be the first concept of the greenhouse. This was what gave room for the evolution which have birthed the modern greenhouse that we know today.

During the 1450s, a royal physician from Korea’s Joseon dynasty compiled detailed instructions on constructing a greenhouse.

READ:  What are Herbicides?

This was a treatise that helped cultivate vegetables during winter, ripening of fruits, and forcing flowers.

All this was achieved by using an artificially heated environment due to a traditional Korean underground heating system known as Ondol.

This heating system was to regulate and maintain heat and humidity. The greenhouse also had cob walls which serve as an insulator to heat.

It was also designed to have semi-transparent oiled hanji windows, which allow sunlight penetration for plant growth.

Generally, this structure was made to protect the plants grown inside from unfavorable conditions on the outside.

The Joseon dynasty confirmed that the greenhouse-like buildings were primarily built to provide their mandarin orange trees with heat during the winter of 1438.

Therefore, they were able to enjoy their produce despite the harsh weather.

During the 17th century, the Netherlands and England made several attempts to construct greenhouses for their vegetables.

They were successful at last, although they faced severe challenges in balancing and providing adequate heat in their early models.

By 1681, the first heated greenhouse in the UK was complete, and the innovation for better greenhouse designs continued even as the better glass and other constructive approaches were improved.

The improvements were significant, and the bettered results were enjoyed.

During the 1800s, the first practical modern greenhouse was established in Leiden, Holland, in the golden era.

This feat is frequently credited to a French botanist known as Charles Lucien Bonaparte. The establishment was primarily made for tropical, medicinal plants.

The French also designed structures for specific plants. For instance, they constructed a greenhouse for their orange trees to keep them from freezing.

This they called orangeries. They also built greenhouses for pineapples farming, which they called pineapple pits or pineries.

It was during this era that large greenhouses were conceived and constructed in Europe. Originally for the elites and to boost botanical studies.

The 20th century brought various designs of greenhouses that are still used to this day. Models such as hoop houses, gutter-connected greenhouses, and small greenhouse structures became prevalent.

At the beginning of the 20th century, the technological constructions of the greenhouse improved, and heavy steel skeletons covered by rigid glass boards were used.

Other necessary features that we have today were adapted and widely used. These features include polyethylene (polythene) film sheets with effective UV-inhibitors, aluminum extrusions, PVC water pipes, and special galvanized steel.

They also became cheaper as of that time.

Theory of operation of a greenhouse

The warmer temperature of greenhouses is due to solar radiation, which can go through the glass roof and walls.

Subsequently, the earth, content, and floor of the greenhouse absorb the heat. Despite the freezing condition on the outside, the inside of a greenhouse is warm enough for its content.

Research has shown a significant effect of infrared radiative cooling, which may have economic implications in a heated greenhouse.

Therefore, the modern greenhouse has been developed to have sunscreens installed instead due to their reflective properties.

This is to reduce heat demand. The application of dyes to transparent surfaces has been suggested for the same results.

READ:  5 Amazing Ways to Use Baking Soda in Your Laundry

This is one of the most crucial features needed to have a successful greenhouse.

The primary reason adequate ventilation is required is that it is used to regulate humidity and temperature to a level considered optimal.

Ventilation is also necessary to ensure the circulation of air around the building. This helps prevent plant pathogens (for example, Botrytis cinerea) from accumulating because these pathological organisms still love an air environment.

Also, proper ventilation ensures an adequate supply of fresh air needed for plant respiration and photosynthesis. It may permit important pollinators into the greenhouse crop.

Poor ventilation can cause a greenhouse and its content to be prone to problems such as the accumulation of plant pathogens.

In greenhouses, recirculation fans and computer-controlled vents are used to achieve proper ventilation.

Heat is one of the essential features of a greenhouse. This is because the plants need to stay warm to grow well.

However, this feature is regarded as one of the costliest operations in greenhouses all over the world.

The structure of greenhouses is designed, so that little or no amount of heat escapes the building.

Nonetheless, solar energy is little and may not be enough during cloudy days, winter, and night-time.

Therefore, supplemental heat is needed. Most greenhouses make use of electric or natural furnaces to warm up their plant.

This operational unit is strictly monitored and regulated to achieve the required amount of heat for plants.

A few greenhouses use what we call “waste heat,” which is gotten from livestock. For instance, a coop of chicken is placed inside the greenhouse.

The chickens generate heat for the greenhouse, which would have been wasted. Other greenhouses without furnaces nor waste energy rely on geothermal heating.

When it gets too warm for the plants inside the greenhouse, cooling reduces the heat. This can be done manually or in an automated manner.

Manually, the window actuators can open up the windows for warmer air to escape the building.

Or in a computerized way, whereby electronic controllers can use a computer to monitor and regulate the temperature by adjusting the furnace operation in the greenhouse.

During the day, sunlight is allowed to enter the greenhouse through the roof and the windows.

However, sunlight is not available at night, but some greenhouses use grow lights (often LED lights) that are often turned on at night to give the plants 24/7 light. This helps in increasing the yield of certain crops.

For almost a century now, the concept of using carbon dioxide to enrich plants has been in use. Many greenhouses make use of equipment to control the level of carbon dioxide in the structure.

This has been known to boost plant yields.

The importance of greenhouse

Greenhouse farming is a technological phenomenon with a lot of advantages. The following highlights the importance of running a greenhouse:

READ:  What Are Gnats? A Comprehensive Guide

Temperature, atmospheric humidity, irrigation, amount of light & shade, and other factors that can affect the growth and development of plants can be controlled in a greenhouse.

The drawbacks include the qualities of a piece of land, short growing seasons, insufficient sunlight, harsh weather, and many more.

These factors cannot affect plants in a greenhouse because the greenhouse and its management offer them the protection they need.

The greenhouse has been recorded to improve food production all around the world.

Crops can be grown all year round in a greenhouse

Everything has its season and time, and when it comes to crops, we have to wait for their season to go before enjoying our favorites.

In special greenhouse farming, specific crops like pepper, onions, and tomatoes can be grown irrespective of the season.

Various flowers and vegetables can be grown in greenhouses during harsh or unfavorable conditions before they are transplanted outside when the external conditions become favorable.

That was why emperor Tiberius enjoyed his cucumber daily, and the Joseon dynasty was also able to enjoy mandarin oranges despite the winter.

They offer better results than those of ancient times. We can enjoy our crops and smell our flowers despite the condition outside.

Pollination is still needed, especially in horticulture. A greenhouse can permit specific pollinators (commonly used are bumblebees) into the building while protecting its content from pests. Artificial pollination can be used to achieve this feat.

Greenhouses can make use of hydroponics

Hydroponics is a technological technique in agriculture whereby plants are placed in water containing all the necessary nutrients in the proper proportion instead of soil.

This saves a significant amount of water, cost, and the farm produce comes in a bigger and healthy form within a shorter period. Hydroponics overcome the problem of space as well.

Greenhouses offer protection to its contents

These natural disasters have been known to put tears on the face of farmers and the whole nation at large.

Also, pests and diseases are factors known to bring about a significant decrease in crop production in the traditional way of farming.

However, planting in a greenhouse reduces the chances of having pests and diseases on your farm.

Since you are the master of that environment, it would be difficult for pests to invade, and diseases are easier to control.

Environmental pollution can bring about a decline in farm production. However, the greenhouse offers the needed safety your plants need for proper growth and development.

This is because you have become the manager and protector of that environment.

8 Laundry Mistakes You Should Avoid

Almost every home now have washing machines, unlike when people do their laundry

What are Shower Molds?

Molds can be defined as a fungus that grows in food,  clothes, walls, 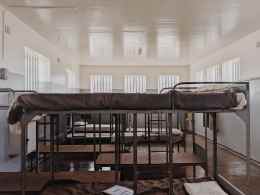 Bunk beds are top-rated options for children, and they can be beneficial in

Rodents belong to the order Rodentia in the animal kingdom